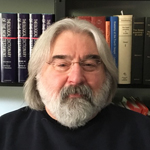 John graduated from Luther-Northwestern Seminary in 1984 and took his first call as pastor at Eagle Lake Lutheran Church in Willmar, Minnesota. In 1987 John was called to Hills of Peace Lutheran Church, Kamloops, British Columbia, followed by Mount Zion in Smithers, and finally to Redeemer in Vancouver where he served for17 years until his retirement in 2016.

John is a member of the Society of Biblical Literature and has been a contributor to the International Greek New Testament Project since 1999. In connection with this, he co-wrote a paper with Dr. Bruce Morrill entitled Parsing Paul: Layout and Sampling Divisions in Pauline Commentaries and was published in the proceedings of the the Ninth Birmingham Colloquium on the Textual Criticism of the New Testament. In 2014 John earned a Diploma in Greek Paleography from Oxford University.